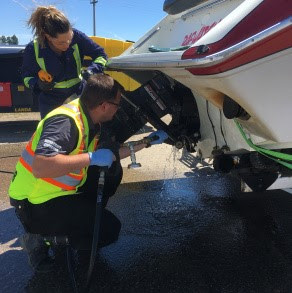 Alberta Environment and Parks - Although spring was slow to arrive this year, yacht to know the aquatic invasive species team has already sprung into action in fight against aquatic invasive species! The mandatory inspection stations have started this year’s search for invasive species on watercraft entering Alberta and have already found the first mussels of 2018 on a sailboat headed for Ghost Lake. When canoe expect all of the stations to be open? They will all have their flashlights out to put a spotlight on these invasive hitchhikers by the end of May, so expect to be inspected!

You might be wondering – what are the inspectors (both human and dog) looking for as they get down on their hands and knees, and crawl under your boat with a small mirror and flashlight? It’s always been more than just mussels. 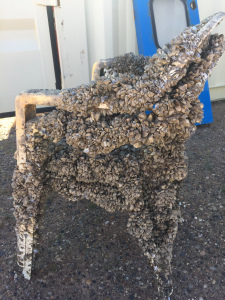 The inspection stations are set up to search for any mud, plants or water that remain on people’s boats as they bring them into the province. This includes, of course, the dreaded dreissenid mussels – quagga and zebra. In 2017, there were 19 boats that had mussels attached to them. An additional 11 boats had Eurasian watermilfoil, an invasive plant known to choke out native species and make recreation nearly impossible when it invades a lake.

These are just two invasive species that have not been found in Alberta yet, and we’d like to keep it that way! Invasive species, next to habitat loss, are the greatest threat to biodiversity in the world. Its estimated right now that an invasive mussel invasion would cost taxpayers $75 million dollars annually, as it will impact things like water infrastructure, recreational fishing, and property value.

If you’re tempted to skip past an open inspection station – think again! The cost of the slip is more than a stern talking to. It’s the law to stop at an open inspection station, and as of May 31, 2018, trying to sneak past could result in a ticket of $310. Forgetting to pull the plug and transporting your watercraft with the drain plug in place could result in a ticket of $172. Arriving with a dirty boat or one harboring any water won’t cost you money, but it will cost you time as the staff have to clean your boat before you can continue on your travels. Make sure to arrive with a cleaned, drained and dried boat to speed up the inspection process!