Two Arrested After Drugs and Firearm Seized in Lethbridge 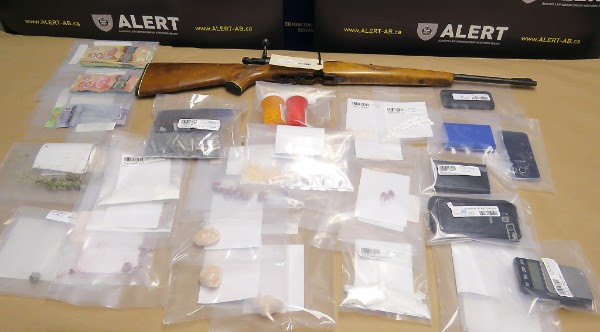 ALERT - A short-term investigation in Lethbridge has landed two suspected drug dealers in police custody, with ALERT also seizing $20,000 in drugs and a firearm.

ALERT’s Lethbridge organized crime team made the seizure and arrests on May 24, 2018, after searching a home in the 300-block of 6A Avenue South. Lethbridge Police Service members provided assistance with the warrant execution.

Inside the home, investigators located an assortment of drugs valued at $20,000, along with a .30-calibre rifle.

Drugs and other items seized included:

RCMP’s National Weapons Enforcement Support Team provided assistance with the investigation and will continue to investigate the origins of the firearm. Neither of the suspects arrested possessed a valid firearms license.

“A gun in the wrong hands is an obvious public safety concern. This investigation came together quickly and we were also able to get some harmful drugs off the street,” said Staff Sgt. Jason Walper, ALERT Lethbridge.

Joel Sovdi, 31, has been charged with possession of a controlled substance for the purpose of trafficking (x 5); possession of proceeds of crime; breach of recognizance (x 4); and four firearms-related offences. Sovdi is prohibited from owning firearms as the result of a previous criminal investigation.

Members of the public who suspect drug or gang activity in their community can call local police, or contact Crime Stoppers at 1-800-222-TIPS (8477). Crime Stoppers is always anonymous.