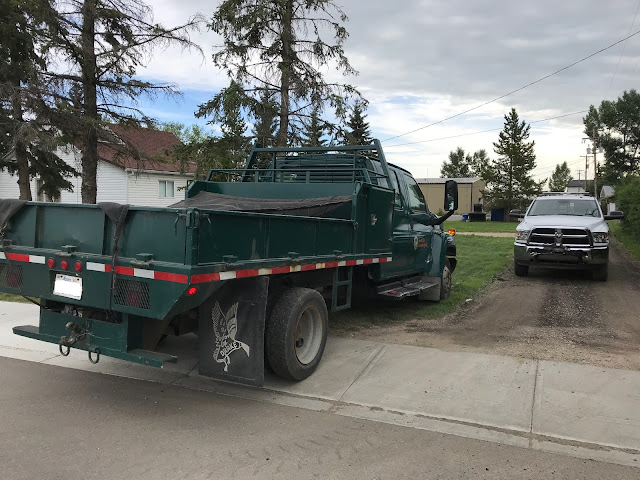 RCMP Alberta - The Airdrie and Didsbury RCMP along with Calgary RCMP Police Dog Services have arrested an Olds man in a stolen commercial truck in the Town of Carstairs.

On Thursday, June 28 at approximately 9:00 am, Calgary Police Services HAWCS helicopter requested Airdrie RCMP assistance with the recovery of a stolen vehicle. CPS reported that a commercial landscaping truck, stolen out of Calgary, was parked in Airdrie along 8th Street. Airdrie RCMP marked and unmarked police vehicles attended to the area. The stolen truck became mobile again and headed Northbound out of Airdrie city limits. The stolen truck travelled Northbound along Range Roads 13 and 14. Attempts by RCMP to stop the stolen truck were unsuccessful as the vehicle continued Northbound. CPS HAWCS helicopter continued to monitor the direction of travel of the stolen truck for officers on the ground.

The stolen truck, travelling at normal speeds, eventually travelled into the Town of Carstairs. Calgary RCMP Police Dog Services along with Didsbury RCMP were contacted to provide assistance in apprehending the suspect. The lone male suspect attempted to flee from the truck within Carstairs and run on foot. RCMP Police Dog Services were successful in apprehending the suspect in a back alley. The suspect sustained minor injuries during the arrest while no one else was injured.

A 43-year-old male from Olds, AB is currently in custody and facing numerous charges including: possession of stolen property over $5000 and flight from Police.

If you have information about this incident, please call the Airdrie RCMP at 403-945-7200 or call your local police. If you want to remain anonymous, you can contact Crime Stoppers by phone at 1-800-222-8477 (TIPS), by internet at www.tipsubmit.com, or by SMS (check your local Crime Stoppers www.crimestoppers.ab.ca for instructions).