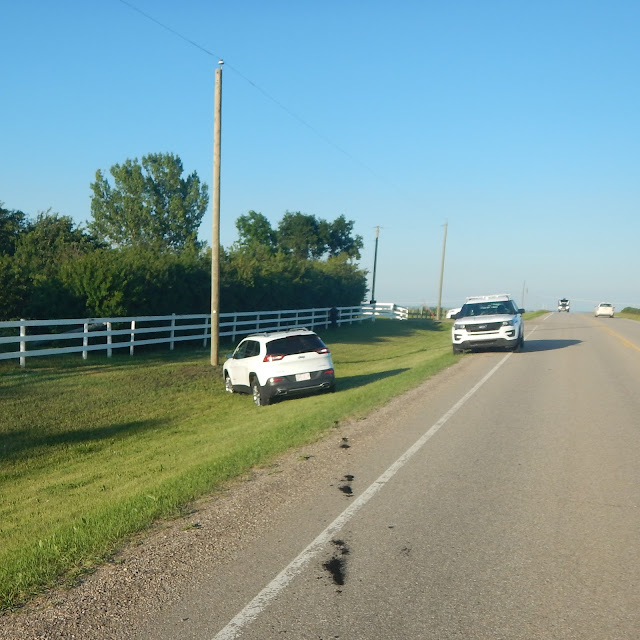 RCMP Alberta - The Airdrie RCMP have arrested a Calgary man for robbery following a lengthy pursuit through Rocky View County, Calgary, and Airdrie.

On Saturday, June 23 at approximately 2:50 am, Airdrie RCMP responded to a complaint of a carjacking that took place in the parking lot of McDonald’s on Edmonton Trail in Airdrie. Two male suspects used bear spray to incapacitate the victim and steal his cash and truck.

Calgary RCMP Police Dog Services and Calgary Police Services HAWCS helicopter provided assistance. The pursuit entered multiple jurisdictions including Rocky View County, Calgary, and Airdrie at speeds exceeding 180 km/h. RCMP members deployed a spike belt on Highway 564 near Township Road 274 which was successful in disabling the stolen vehicle. The suspect then drove intentionally toward an oncoming motorist forcing them to stop their vehicle to avoid a head-on collision. The lone suspect exited the vehicle and attempted to force his way into the motorist's vehicle. The motorist was able to accelerate their vehicle away from the suspect to safety. The suspect fled to a nearby residential acreage and confronted the property owner who was standing on their deck. RCMP Police Dog Services and CPS K9 units entered the property simultaneously and apprehended the suspect without further incident. Though shaken from the confrontation with the suspect, the home owner was not harmed. No one was injured throughout the pursuit and arrest.

A 25-year-old Calgary man has been arrested and is currently in custody pending numerous charges.

If you have information about this incident, please call the Airdrie RCMP at 403-945-7200 or call your local police.  If you want to remain anonymous, you can contact Crime Stoppers by phone at 1-800-222-8477 (TIPS), by internet at www.tipsubmit.com, or by SMS (check your local Crime Stoppers www.crimestoppers.ab.ca for instructions).