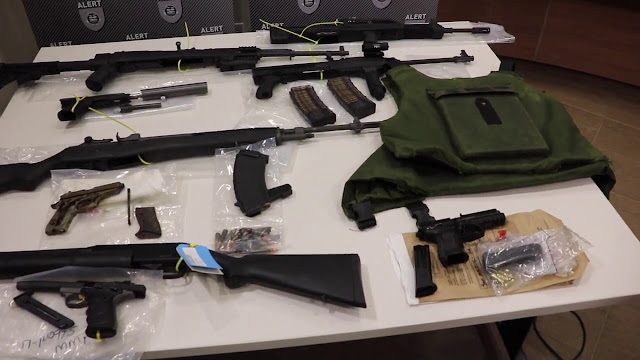 ALERT - A total of eight firearms – including assault rifles, suppressors, and over-capacity magazines – were seized as the result of an ALERT investigation in Edmonton and Fort McMurray.

ALERT’s Edmonton organized crime and gang team seized the high-powered firearms following an investigation that primarily focused on two brothers. Alexander and Ryan Kurkut, both 27 years old, were arrested on May 18, 2018, and charged with numerous firearms offences.

ALERT’s investigation into the brothers’ involvement in organized crime resulted in the seizure of the following items from their home in southwest Edmonton and a storage facility:

Both brothers have lifetime firearms prohibitions as the result of previous criminal convictions.

Meanwhile, an associate of the brothers, Nicolas Moores, was also implicated in the investigation for similar offences. The 26-year-old was arrested in Fort McMurray and, at the time of his arrest, he had a loaded handgun tucked into his waistband. Additional firearms were seized from his southwest Edmonton home.

The following items were seized in Fort McMurray:

The Kurkut brothers have been jointly charged with 38 offences. Their charges include a number of firearms offences, as well as possession of forged identity documents. They have been released from custody and are expected back in court on June 13, 2018.

Members of the public who suspect drug or gang activity in their community can call local police, or contact Crime Stoppers at 1-800-222-TIPS (8477). Crime Stoppers is always anonymous.

ALERT was established and is funded by the Alberta Government and is a compilation of the province’s most sophisticated law enforcement resources committed to tackling serious and organized crime. Members of Calgary Police Service, Edmonton Police Service, Lethbridge Police Service, Medicine Hat Police Service, and RCMP work in ALERT.