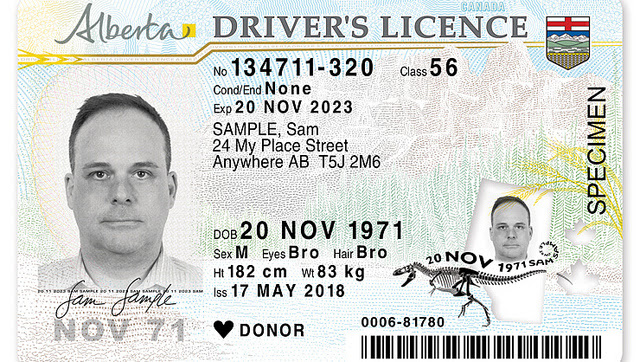 Government of Alberta - New driver’s licences and identification cards will help protect Albertans against counterfeiting and ID theft and save government more than $1 million annually.

To better protect Albertans from fraud, the government has redesigned provincial driver’s licences and ID cards with updated security features like clear windows, laser engraving and 3D embossing that makes it harder to alter or replicate the cards.

The new cards also include imagery that reflects Alberta’s landscape and history.

“Our government takes identity fraud very seriously. We are the first jurisdiction in North America to integrate this combination of design and security to protect Albertans from ID theft and prevent fraud. We are using the latest technology available to safeguard people’s personal information and prevent scams.” - Stephanie McLean, Minister of Service Alberta


The cards are now in production and, because of advances in technology, cost less to manufacture than the previous design, saving Alberta taxpayers more than $1 million annually.

The driver’s licence design depicts Castle Mountain and the Bow River in Banff National Park, while the ID cards feature a Wild Rose, Alberta’s provincial flower. Both cards also include an image of an Albertosaurus, a dinosaur whose name honours Alberta, where its remains were first discovered.

The last redesign occurred in 2009 and the Alberta government has incorporated advice from law enforcement agencies to ensure the cards have the most up-to-date safeguards against fraudsters and identify thieves.

“The new security measures in the Alberta driver’s licences and identification cards will help ensure the safety and security of the public’s information. These security measures will help law enforcement in identifying those individuals who are fraudulently attempting to use this document for illegal purposes.” - Brian Simpson, Deputy Chief, Edmonton Police Service


There is no need to replace current licences or ID cards. Current cards will be phased out through the normal renewal process as cards expire.

Some security features on the cards can be verified using a look-listen-feel approach: