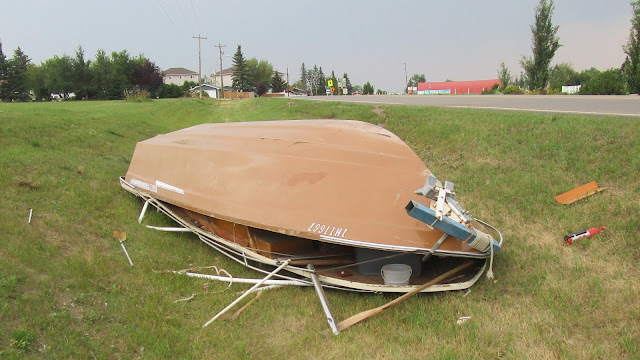 RCMP Alberta – The Beiseker RCMP have one 30-year-old male in custody following the theft of a boat, and an unusual incident where the stolen boat ended up in a ditch.

On August 1, at approximately 11:55 a.m., the Beiseker RCMP received a complaint that a suspect in a black Dodge truck stole a boat and trailer from a residential property and was last seen entering Irricana. An RCMP officer in a marked police car travelling westbound into Irricana witnessed the suspect truck travelling eastbound toward him at a high rate of speed. The driver lost control of the boat and trailer causing the boat to fly off the trailer into the southbound ditch.

The responding RCMP officer attempted a traffic stop but the truck had already entered a rural road, still traveling at a high rate of speed, and dragging the boat trailer upside down. Based on a concern for public safety no pursuit was engaged.

Beiseker RCMP with the assistance of Strathmore RCMP, Police Dog Services and Calgary HAWCS flooded the rural area in order to locate the truck.

The truck and boat trailer, which had become unattached from the truck, were located in the ditch on Range Road 252 just north of Township 270. It appeared to have lost control and driven through barbed wire fence. Police Dog Services in collaboration with HAWCS located the suspect male driver in a farmer's field.

The male was taken into custody by the Police Dog Services officer. As a result of minor injuries incurred during his arrest, he was taken to a local hospital where he was treated and released. The male remains in police custody pending a judicial interim release hearing. He is facing several criminal code charges.

Investigation reveals that the black Dodge truck used in this offence was reported stolen out of Calgary. There is no indication that this truck is related to earlier thefts from a rural property reported from on July 22, and 28.

The incident, and the suspect male involved remain under investigation by Beiseker RCMP in cooperation with Strathmore RCMP, Forensic Identification Section, and the Southern Alberta Crime Reduction Team.

The RCMP acknowledge the assistance of our partner, Calgary Police Service, HAWCS.