Car collides with house near Readymade 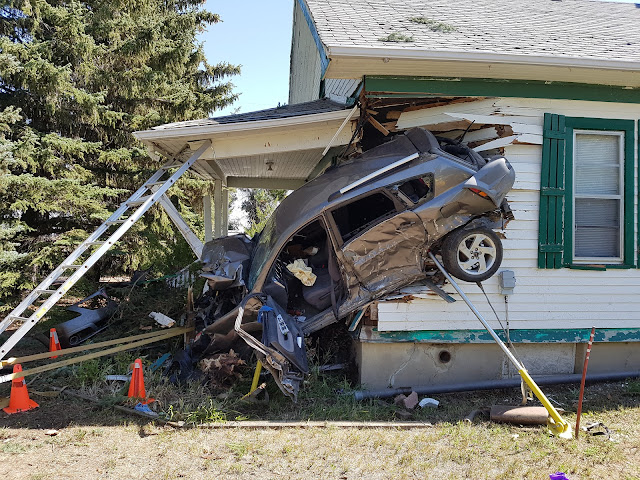 RCMP Alberta – Coaldale RCMP members along with the Coaldale Fire Department and EMS responded August 30 to a serious collision involving a car being driven into a house along Highway 512 near Readymade.

Around 12:30 a.m. a grey Pontiac Vibe was heading eastbound on Highway 512 when it veered south from the highway into the ditch and continued into some trees then ended up striking into a house. The house was occupied at the time with a mother and young children. The impact of the collision was such that the car was wedged into the house. The car crashed into the house at a the northwest corner which was a children's bedroom. The north porch was also damaged. Fortunately the occupants of the house, a mother and young children, were in the south portion of the house and not injured.

The driver of the car, a 70year old female from the Coaldale area, was trapped in the car and extricated by members of the Coaldale Fire Department and taken by ground ambulance to the Chinook Regional Hospital in Lethbridge for treatment. At the time her injuries were not confirmed. It has been learned the driver has some serious yet not deemed life threatening injuries. She will remain in hospital for treatment.

The Pontiac Vibe was lodged into the house for a number of hours awaiting an assessment of the structural integrity of the house. Late in the afternoon the car was removed and the building properly supported.

This investigation is continuing and the Coaldale RCMP have not made a determination about any criminality at this time. Anyone who may have witnesses this collision or the driving pattern of the grey 2005 Pontiac Vibe is requested to call the Coaldale RCMP at (403) 329-5080 (rural detachment) or (403) 345-5552 (municipal detachment). Alternatively they may call Crime Stoppers at 1-800-222-8477 or through the internet at www.tipsubmit.com. Crime Stoppers will pay cash rewards for information that leads to an arrest, recovery of stolen property or seizure of illegal drugs. Crime Stoppers does not subscribe to call display and the identity of the caller will remain anonymous.